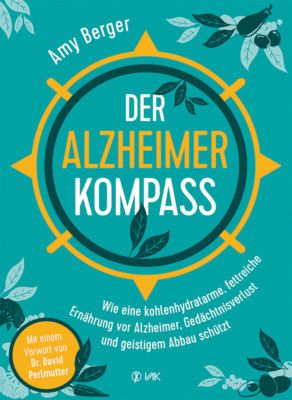 More and more people are reaching old age. And more and more elderly people are developing Alzheimer’s disease – a disease that, despite intensive medical research, has not lost its terror and is considered incurable. Drugs that were supposed to fix the supposed cause by breaking down amyloid plaques in the brain proved ineffective. In fact, these protein compounds were found to be present in the brains of healthy people as well.

In the meantime, there is increasing evidence that a disturbed metabolism is the cause of Alzheimer’s – and not the protein plaques: If the brain can no longer process glucose – i.e. sugar and carbohydrates from our “modern” diet with industrial mass-produced goods – due to a lifelong massive oversupply, it literally runs out of “fuel”. It is not without reason that Alzheimer’s disease is now also referred to as type 3 diabetes.

So the only way to maintain cognitive functions to prevent memory loss and behavioral changes is to provide another source of energy, which the brain can use even better than sugar after a short adaptation period. We’re talking about ketones, which are made in the liver from fatty acids.

This is where nutritionist Amy Berger comes in and explains why the key to success is a low-carbohydrate, high-fat diet. Although this approach has been addressed in the scientific literature for years, it has only now been studied under clinical conditions – with promising results.

Here you will learn at a glance:

How a low-carbohydrate, high-fat diet protects against Alzheimer’s, memory loss and mental decline